Here’s a guest post from June, my colleague at Kids Out and About. She occasionally (and it’s very occasionally lately–ahem!) writes a blog called My Name is June. I Like to Cook. Thanks, June!

Last Sunday Hannah and I decided to make pancakes for breakfast. Now this is not a rare occurrence; we make pancakes fairly frequently for Sunday breakfast. I had bought some blueberries the day before just for this purpose. I did forget to get buttermilk, though. However, this day, Hannah decided she wanted to make them because we had eggnog in the fridge and she wanted to make eggnog pancakes, and so I said she could and I would go behind her and clean and make the bacon. She started gathering her ingredients while I started the bacon. As she pulled out the baking powder, she asked me what the difference between double-acting baking powder and regular baking powder was. “Oh god”, I thought to myself, “I can’t quite remember why they call it double-acting, I know I used to know, and I, the goddess of food, can’t let my offspring know that I don’t know everything!” Or something like that. Actually that’s really not true, I am fine with admitting that I don’t know everything to my kids, and a few others, but I will NEVER admit that to my hubbie. Or to you. I am the final authority on all things culinary! I am the goddess of food! Don’t forget it. So I mumbled something about people how in the olden days people had to make their own baking powder which consisted of a few ingridients mixed to gether in a certain proportion and when commercial baking powder became available ‘double acting’ connoted that it contained two active ingredients, only one of which I could remember at the time. 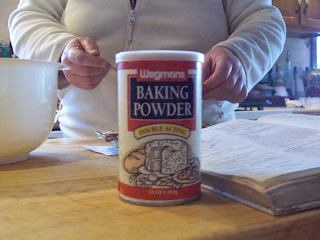 Hannah and I really are starting to enjoy cooking together. She is becoming enthusiastic about learning about cooking and willing to try new things. And really, isn’t that about all it takes? Oh, and learning that people who like food and care about it do not serve cheese in a can. Or a jar. (have you ever eaten that stuff? Disgusting!) So I find the times when Hannah wants to cook to be times when she will let her teenagerish attitude down and just be a nice girl again. She respects my abilities in the kitchen and sincerely wants to hear what I have to say about cooking. And so I may slip in a word or two about values, or things I care about, what I want her to know about life. Cooking together gives her a way to let down her defenses. I treasure that time together.

So, as we talk and cook, and drink coffee, (yes, I am a terrible mother. I let my fourteen year old drink coffee. Sue me.) we start to cook the pancakes on the cast iron griddle. I had a banana on the counter that was too ripe to eat, but perfect to cook, so we sliced that and added it to some of the pancakes as we laid them on the griddle. We made some with blueberries, some with banana and some with both. Oh, and don’t forget the eggnog. I wasn’t sure how the combinations would be, but hey, I am always up for experimenting. As we started eating them, with some really great maple syrup from Vermont provided by my friend Gi-gi, we started noticing that the texture was a little waxy, and flat. Maybe it was the eggnog? No, that wouldn’t have done it. Why were these so different? And then I realized: Hannah had forgotten to put in the baking powder. After our long discussions on the origins of baking powder. The pancakes had the consistncy of crepes or clafouti, and they were still quite delicious. We ate them all. We decided to call them pancrepes. It was fun. 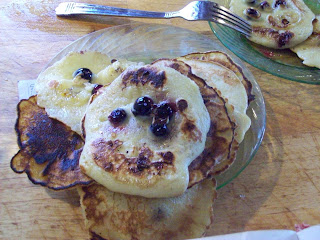