As you know, I generally buy the kids’ Halloween costumes.

One thing that’s impressed me over the years is that the girls gravitate to the “girl power” costumes. M was Cleopatra last year, another favorite was the Statue of Liberty. This year J’s going to be Padme Amidala from Star Wars.

That’s just how they roll. We still refuse to buy clothes at JC Penney because of their “I’m too pretty to do homework” t-shirts. J is outspoken about disliking items that are too revealing, whether it’sÂ  acrobats at the circus or me wearing a shirt she considers too low-cut and “boob-ish.” M’s personal style is resoundingly in the “jock” category, and these days I don’t even suggest skirts or dresses for every day or even special occasion wear, although she’ll wear a dress for a costume or, very occasionally, as a tunic over a pair of pants.

Anyway, every year, costume catalogs arrive in the mail and the girls turn up their noses at anything overly frilly or revealing. Last year, J bypassed the many lacy/sparkly/dressy costumes and chose the Eskimo girl costume in part because itÂ  offered her the kind of coverage that makes her feel comfortable. It was also, incidentally, really adorable. I avoid recent full-frontal photos, but here’s a picture from last year:

J is an Eskimo girl, M is Cleopatra, complete with snake.

Anyway, this year, there was a flurry of Halloween-related activity early on, because M and her fifth-grade friends wanted to coordinate costumes. They decided that they’d go with crayons, and M claimed green. We checked out our options on Amazon. This one was for the young kids:

A boy is modeling much the same costume that comes in “tween” sizes: 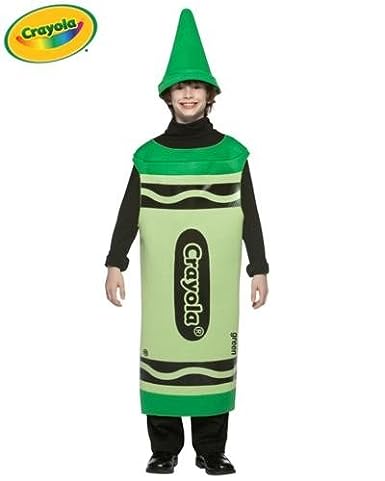 There was also this “tween” costume sized for girls:

Okay, that image is teensy, but hopefully, you get the idea. So, why is it that once the girls get to be about ten, they’re expected to show as much bare skin as possible? It’s really freaking irritating. Both M and I agreed on that point, but then I remained neutral while M weighed her options. I really wasn’t sure how it was going to go, because as I’ve said, she’s anti-dress in general. But she decided she liked the tween girl-styled one. She thought it would be easier to move in because it was less boxy and not as long in the legs. She also thought that her friends would prefer it, so they’d match, although her friends vary in size enough that some will be forced to go with the younger version in order to fit. I stipulated that this girl was too scantily clad and would be cold, but we agreed that M would wear blackÂ  leggings and a shirt underneath. We ordered it. It arrived, and it’s fine. It’s not high-quality, but it wasn’t expensive, either. M is happy.

And if M is happy, and I’m done, then I’m happy. Case closed.

Except, then I started seeing references in blog posts and on Twitter about the “sexy crayon.” I can’t find any of them now, of course, but an example was a Tweet that said something like, “#sexycrayon WTF” with a link to my daughter’s costume. I swear this happened, even though I can’t find the items now that I’m writing. But I remember, because, of course, every time I saw it I was feeling judged. And you know we Mamas are well aware of being judged. So, I started getting pissed off.

Here’s the thing. I’m a feminist, and I’m pretty aware of gender issues and consumerism. I agree with most of what I read about the dearth of gender-neutral options in clothing and toys for young children. I believe that those little messages that some people say are too unimportant to pay attention to are important, and it’s valid to refuse to purchase something that demeans girls, demonizes boys, or just plain spreads bad karma. And I think that there’s way too much sexualization of young girls and hyper-sexualization of women. And it completely freaks me out. Seriously.

So, okay, that’s a problem. I get that. But look again, and I’d argue that the toddler and girl versions of these costumes are fine (except for Kitty, which is trashtastic post-toddler). Sure, they’re dresses, but many girls like to wear dresses. Curse me if you will, but it’s true.

It reminds me of the recent controvery over the LEGO Friends, when many feminists were so upset because, in an attempt to appeal to girls, LEGO started creating lots of pink brick kits to build beauty parlors. I have the same complaints about making girls’ toys all about shopping and looks, and I would love more big ol’ boxes of multi-colored building blocks instead of all of these specific, directions-dependent sets. LEGO relied a bit too much on focus groups of little girls raised in a pinakalicious world and didn’t pay enough attention to their mothers, who remember the good ol’ days when LEGOs were gender-neutral and not a bunch of kits full of grey and black blocks and teensy guns.Â  Frankly, I found their first effort a bit depressing, too, but I was surprised how emotional, how betrayed, how outraged people were.Â  I suspected that LEGO Friends would sell big (they did), and I felt like it was a nice opening of a door to more products. Part of me was glad for the criticism, because surely now that LEGO’s seen the sales possibilities and heard the criticisms, they’re likely to respond with a wider array of items appealing to girls, including some gender-neutral products. And even though I hate the shopping-beauty parlor themes and the way the little LEGO figures for girls have to have, you know, figures, I think that pink blocks might get more girls building stuff. My kids have this pink-and-pretty Fairy Superstructs set, and they love it, and friends who visit gravitate to it. The truth is that pretty stuff is appealing to girls, and the trick is to get pretty stuff that’s not completely vapid. It’s one of reasons I mourn the loss of a now-defunct Fisher Price line that was girl-appealing without being trashy and entirely drenched in pink. Then again, since they don’t sell it anymore, it must not have sold too well.

It feels like, with this “Sexy Crayon” outrage, people are angry that companies would want to force a girl into a dress as part of a vast Slippery Slope Conspiracy to turn every Sweet Little Girl into a Grown-Up Slut. In the case of the crayon, once you’re a grown-up the costume’s much the same, but they do suggest a pair of heels:

Tween or adult, it’s still just a freakin’ tank dress, people. But now I feel guilty, because by purchasing the dress instead of the boxy “boy” version, I’m Part Of The Problem. My child, with her fully-covered arms and legs, will not be looking even the teensiest bit sexy. Still, I feel guilty because I’ve voted for the bad guys with my wallet.

It’s difficult to avoid, because even the un-sexiest costumes are marketed in a “sexed up” manner. Remember J’s cute little Eskimo Girl costume above? Here it is available online:

Suddenly she’s all coy, and they even call the costume “Eskimo Kisses.” Blegh. The whole thing is pretty frustrating, and I’d boycott all the costumes if my kids and I weren’t too lazy to make them ourselves!

I hate how pink and pretty is conflated with vapid ditz themes in toys, and I hate that costumes that look cute or attractive are conflated with saucy little sexpot outfits. Being a feminist while understanding that girls sometimes want to embrace that which is stereotypically “feminine” feels like a tightrope. And I’ve got quite a few years to continue walking it.